Myxomatosis in the Iberian hare

With the publication on August 10, 2018 by the Ministry of Agriculture, Fisheries and Food (MAPA) of the “Report on cases of hare myxomatosis in Spain”, the first case of myxomatosis in Iberian hare (Lepus granatensis) was made official in Spain. From here we want to compile the information obtained through the different sources of this new situation that can seriously affect the hare population of the Iberian peninsula. 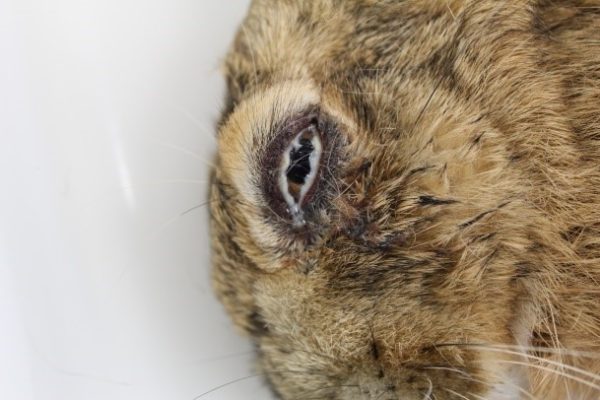 Hare with blepharitis and mucopurulent exudate. Own image.

Myxomatosis is a viral disease that affects the rabbit and which is transmitted mainly by the bite of blood-sucking insects, especially mosquitoes and fleas. The classic form of the disease is manifested by the appearance of myxomas at the inoculation point (sting), inflammation of the eyelids (blepharitis), mucopurulent discharges and edema in the cephalic, cervical and ano-genital regions. The disease has a seasonal presentation, with cases concentrated in the summer months, since this is the time with the greatest presence of vector insects. 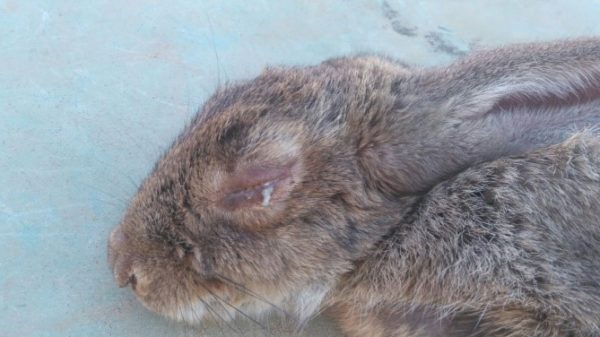 Rabbit with blepharitis and mucopurulent ocular discharge. Own image

The same report shows that the cases confirmed by the LNR are already 69. Ciudad Real, Toledo, Albacete, Seville and Malaga join the provinces already mentioned above. To our knowledge, preserves located in the provinces of Madrid and Badajoz have detected suspected cases of myxomatosis in hares; although the lack of laboratory analysis means that the cases have not been confirmed. 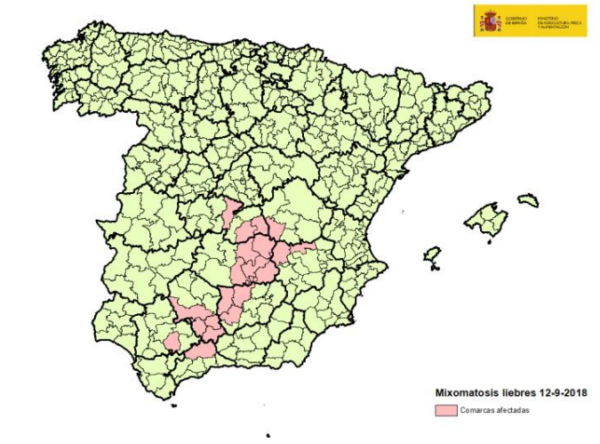 Map of the regions with confirmed cases of myxomatosis in hare. (Source: Situation of myxomatosis outbreak in hares; Ministry of Agriculture, Fisheries and Food)

Myxomatosis has been known to be present on the Iberian Peninsula since 1953, and is one of the main causes of the decline in rabbit populations that occurred in the last century. Currently, the rabbit population is in equilibrium with the virus, thanks to the immune response generated after so many years in contact with it.
Although this fact causes few cases of disease to occur in the rabbit, at present there is still a great viral circulation in the Spanish ecosystems. In this sense, studies carried out in Andalusia have shown a seroprevalence of myxomatosis using the ELISA (antibody detection) technique of 60.8%, during the period 2009-2012.
This situation, together with a rainy spring that favors the presence of vectors, has been able to trigger the disease to appear for the first time in the Iberian hare. It should be noted that the areas where outbreaks have been described in hares have a high rabbit density.
It is suspected that there have been spontaneous cases not previously detected, although the high morbidity and mortality observed this summer is due to the high pressure of infection they have suffered due to the above.
CPreviously, cases of myxomatosis in European hare (Lepus europaeus) ehad been described in France, Italy, Ireland and the United Kingdom. Therefore, the Iberian hare should be considered as susceptible to being infected by the myxomatosis virus.

Risk for the other hare species in the Iberian Peninsula

The European hare is also present in the Iberian peninsula, north of the Ebro river, so it is interesting to follow and monitor this population with the aim of early detection of possible cases.
In the Iberian peninsula there is a third species of hare, the piornal hare (Lepus castroviejoi), which should also be the object of attention as it is an endemic Iberian species, classified as a vulnerable species, and which is only found in the Cantabrian Mountains. Although, the different epidemiological context in which this species inhabits (mountain climate) makes the risk very moderate (due to the lower presence of vectors).

Distribution map of the different species of hare in Spain. (A) Iberian hare. (B) European Hare. (C) Piornal hare. (Source:. AAtlas and Red Book of land mammals in Spain).

Although the hypothesis that the cases that occurred are due to a higher infectious pressure towards the hare is plausible; other hypotheses should not be discarded. It would be convenient to carry out molecular analyzes to see if we are dealing with a classic strain of the myxomatosis virus, or if, on the contrary, it is a new variant that makes this virus more virulent and pathogenic towards the hare.
Similarly, it would be interesting to study the diagnosis in order to rule out other pathogens; new or already known, that can act as a primary or concomitant cause. The possibility that the occurrence of cases of myxomatosis is due to immunosuppression, triggered by this agent or other primary agents, and which leaves the animal unprotected against the virus should not be ruled out.

As it is a seasonal disease, it is logical that with the arrival of autumn and winter the number of cases decreases, although the institutions with competences in the field of environment and / or animal health, as well as associations of hunters and rural guards, they should be alert to the evolution of the outbreak. It should be noted that the Iberian hare is a very popular small game species, capturing more than a million copies a year in Spain.
DIn this way, the spring and summer of 2019, as well as those of subsequent years, will be critical to check whether, as it is postulated from the MAPA, these cases are due to a special and specific circumstance, or if, on the contrary, the Myxomatosis can pose a real risk to the viability of the Iberian hare.