Progress in the fight against African Swine Fever (ASF)

The African Swine Fever or ASF is currently one of the biggest concerns of the livestock and hunting sector in Spain.

It is a viral disease that affects both domestic and wild swine, for which there is no treatment or vaccine ... until now

And it is that, Dr. Sánchez-Vizcaíno, professor of Animal Health at the Complutense University of Madrid, and director of the reference laboratory of the World Organization for Animal Health(OIE) for African Swine Fever, announced, on the occasion of the celebration of SEPOR (Lorca, Murcia), that after years of work good results have been achieved with an experimental vaccine.

This vaccine could be used both in pigs and in wild boar orally, although in the case of wild boars it faces the difficulties of vaccinating a wild population.

Outbreaks of ASF have been detected in Europe since 2007, in different Caucasian countries. Despite the preventive and control measures that have been taken, the disease has progressed slowly but steadily towards the west and south of the continent. Thus, in October 2018, the disease is already in Belgium, with 161 cases of wild boar already detected (as of November 13, 2018). 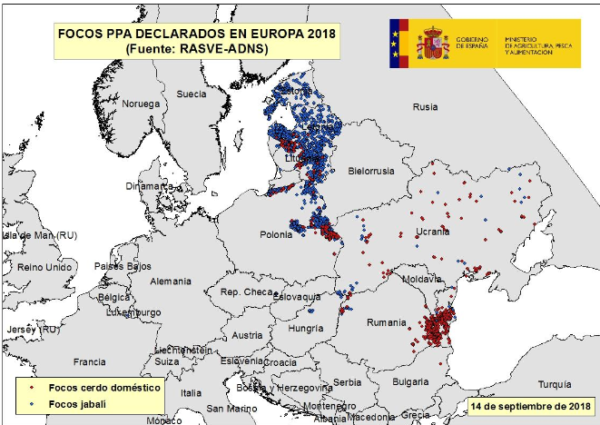 Situation of ASF in Central and Eastern Europe (Source:  Ministry of Agriculture, Fisheries and Food) as of September 14, 2018..

Importance of the wild boar

In Spain, boar densities have increased exponentially in recent decades. The number of boar killed is estimated to have increased 700% in the past 30 years. Although part of this increase may be due to more intensive management of its populations, it should not be forgotten that, as it is a generalist and highly adaptable species, the change in land use that has been occurring in the Iberian peninsula in recent years, also favors the population expansion of this species. This same situation is reflected in other European countries, which represents a great risk for the spread of the disease between countries, since animals do not understand borders. 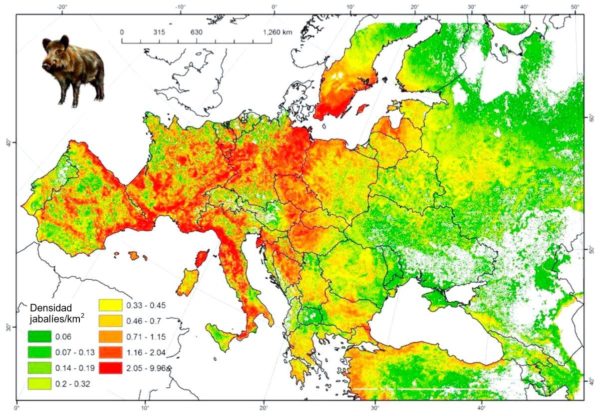 It is for all of this that the boar is in the focus of the fight against the expansion of the ASF. In the European Union (excluding Romania), more than 90% of ASF notifications were attributed to wild boars, with sporadic cases on pig farms; and it is considered the main source of entry of the infection in areas where the disease did not previously exist.

Although the importance of the control of this species is clear, we must not forget the human factor in the transmission of the disease, as was evident at the entry of the virus in Belgium. After studying the outbreak produced in this country, it is hypothesized that entry from a military base present in the area of the outbreak, which is the destination of Belgian, Czech and Polish soldiers (countries with outbreaks of ASF), who had made recent trips to the Baltic countries.

Although it is true that the virus does not affect human beings, clothing and especially footwear, it can act as a mechanical vector, transferring the virus from distant areas. Similarly, vehicles can play this role, not requiring the transport of infected animals, but simply the entry of vehicles to infected farms. To this we must add the trade and transfer of meat (even at a private level), which may also contain the virus. For this reason, to prevent the virus from entering a country, zone or farm, it is vital to implement biosecurity measures and programs. Thus, simple measures such as proper cleaning and disinfection of vehicles and clothing is everyone's responsibility. Likewise, it is necessary to be very careful with pork / wild boar meat products originating from countries with current cases of ASF. In this sense, pig feed containing the virus has recently been detected in China.

We have already highlighted the role that the wild boar can have in spreading and maintaining the disease, although how would the entry of ASF in Spain affect the hunting management of wild boar populations?

In the event of this situation, the economic losses could become very high. ASF causes acute death in this species, as in pigs. To the different losses that the virus could cause, we must add the limitation of animal movements and possible commercial restrictions, not only on live animals, but also on their meat products. These restrictions could affect both the export / import and the movements produced within the country.

Finally, the ban on hunting in the outbreak detection zone could be adopted as an emergency measure against the ASF. This measure would affect not only the hunting of the wild boar, but also the hunting of any species of big game (and to a lesser extent small game). Although this measure may seem a priori contradictory, it was adopted by the French government in the area close to the area of the outbreak that occurred in Belgium to prevent the movement of the animals, and therefore the translocation of the virus.

This situation makes vaccination against the virus a very helpful tool for the hunting management of this species, although some drawbacks must be overcome.

How to vaccinate a wild population?

Oral administration greatly simplifies the distribution of the vaccine, although it has other disadvantages.

The first is that the size of the population to be vaccinated must be known. Without these data: How many vaccine doses must we deposit in a specific area (hunting ground) for the population to be protected? Currently, there are several scientifically validated methods to estimate wild boar abundance in game reserves. These data not only help to prepare a correct vaccination plan, but are also a very useful management tool.

Likewise, we must have a system to distribute the oral vaccine (in the form of vaccine baits) to the target population. For this there are already different alternatives for the realization of feeders in which only the boar can access, even some selective only for scratches. In this sense, the Institute for Research on Hunting Resources (IREC),has carried out field studies that demonstrate the effectiveness of these systems for the distribution of vaccine baits. Like censuses, the implementation of selective feeders by species is a useful tool for managing and improving populations, since it can feed certain species at the ages when they are most susceptible.